Baa Baa black sheep have you any wool? NOT ALL WOOL IS CREATED EQUAL.


Generally, wool is "graded" by the length of each individual hair.  There are two main components to assessing quality of wool.  1.  The length of any individual hair, and 2. the location on the animal from where  the hair had been cut.  Often the finer, thinner hairs are found on the neck, belly and underarms of a sheep.  Not only is this hair much thinner, but also very soft and of long staple.  Other factors which contribute to the quality of wool include climate, habitat/altitude and even vegetation. 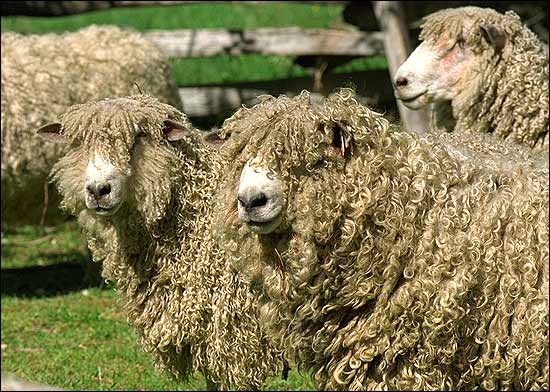 Many sellers make the claim of certain types of fibers used in production which may be false.  Here are some short descriptions of what these terms mean, and very loose descriptions on how to identify such:
Wool:  A loose definition of wool is hair which has been harvested from an animal.  Wool is most commonly harvested from sheep, although may also be taken from goats or even camel.  The single best way to identify if your rug is wool is by removing a knot and give it a burn test.  When subjected to a flame, once burned, smells not unlike that of human hair.
Dead Wool: An unfortunately brittle, coarse, poor quality wool used in production of many high volume commercially available rugs.  This type of wool often will shed profusely, and render a rug lifeless in a short period of time.  Dead wool is often the refuse from combing out finer, longer stapled wool.
New Zealand Wool: Typically New Zealand wool is often known for it's longer staple, and naturally soft feel.  This is due in part to both the altitude and vegetation available to herds.  It's not uncommon for a rug to have a New Zealand and local wool blend to counteract the investment of import and material cost.
Gazni Wool: Typically found in higher quality Peshawar weavings, this comes from high grazing sheep in the mountains of Afghanistan.  This wool is soft yet firm to the touch: Depending on the way in which the wool has been treated, Gazni wool often has very slippery (almost oily sides), with a crisp and strong feel after clipping of the pile.
Semi-Worsted Wool:  Semi-Worsted wool is a very solid quality wool which is retrieved from wool by the process of combing.  After wool has been combed, finer, longer strands of wool are separated from shorter less desirable wool.  The term Semi-Worsted wool refers to a wool which has been produced by one of two ways: Either the very high grade wool (after being separated from low to mid grade), or the highest grade wool which is separated from the lowest grade and then is blended with a medium grade wool.
Worsted Wool: Worsted wool refers to a process (and product) of combing excellent quality wool from high, medium and lower grade (determined by length, or staple.)  After wool has been combed, the finest, longer strands of wool are "Worsted."
Qurk / Kork Wool:  Qurk wool is taken from the neck, belly and underarms of the sheep.  This is often considered the most choice of wool to come from the sheep, as it is very fine, thin, and long stapled.  Kork wool is most often reserved for only the finest of weavings.  Perhaps this type of wool is most commonly found in high kpsi isfahan, nain oriental rugs.  The appearance of fairly untreated Qurk wool has almost a dull finish, yet very compact, firm and dense feeling pile.
Pashmina Wool:  Pashmina wool is exclusively taken from the coat of Himilayan goats.  This wool is very silky, long stapled, and very unusual to come across in exported weavings from rug producing countries.  Pashmina wool is very soft, highly sought after, and very expensive. 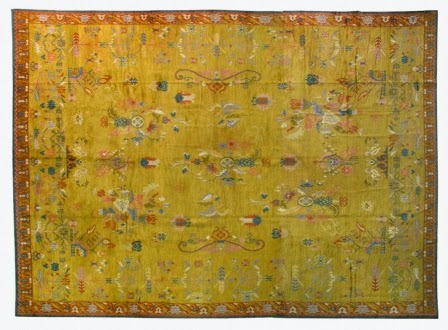 Manchester Wool:  Manchester wool is almost entirely exclusive to one genre of rug known as the "manchester kashan," although has been known to have been used in other types of rugs from rug producing countries.  Manchester wool is derived from a specific type of sheep variety called the Merino sheep.  In the instance of Manchester kashan rugs and carpets, these are rugs which implimented the use of Merino wool originating from Australia.  The processing into yarn used in weaving such rugs was done in Manchester England, and ultimately exported to Iran for weaving.  The Manchester Kashan is a very unique variety of Kashan, with a naturally high luster, and long staple fiber.
Mohair: Mohair is harvested from the Angora Goat.  Mohair is often very fine, long stapled and have a silk like appearance and feel.  Mohair rugs are very unusual to come by, as mohair is a very expensive and hard to come by fiber to be used in production of Oriental Rugs.  One should carefully inspect a mohair rug for color run, as it's not entirely uncommon to find overdyeing of colors which could potentially run.
Camel Hair Wool:  Camel hair rugs are not exported to the US to the extend of which they had been in and around the turn of the 19th century.  Camel hair was typically implimented in many weavings such as Serab and other rugs.
Chemically Washed Wool Rugs:  There are techniques which are used post production which chemically treat the wool pile of a rug to give it a softer feel and more lusterous pile sheen.  While these washes may be used successfully with little affect to the woolen fibers, it is not entirely uncommon to come across a rug which has been too harshly treated with this process.  Similarly, there are rugs which have a very low quality wool which have been subjected to these washings which make them appear to have a better quality wool than is actually used.  In both cases of too harsh a wash, or low quality wool to begin with, copious amounts of shedding will be apparent from the agitation test.

How will I know if my wool is healthy?
What to look for:  Judging the quality of wool takes many years of experience, however, there are ways for even a novice to pick up on sub standard quality rugs.  Although it's not uncommon for a new Oriental Rug to shed just a bit in the first several months, there are extended cases of shedding which are a serious problem.  A quick test for low quality wool is to first thoroughly vacuum the face of your rug, then agitate the pile back and forth with your hand a dozen times to see if wool surfaces.  If the wool which surfaces to the pile may be rolled into a ball which is equal to or greater than the height of the rug's pile, chances are you have a carpet where inferior quality wool had been used in production.  Additionally, wool which feels "brittle," "coarse," "dry to the touch," or "wirey" are also signs of a lower grade, or "less choice" selection of wool used in weaving.  In the long run, this generally means the longevity, durability and and appearance of your rug will be compromised.  That is to say, an Oriental Rug which has a lower quality wool will show signs of wear far quicker and appear "used" far sooner than that of an Oriental Rug which implements a higher grade wool.
Low wool grade rugs are a problem in more than just looks alone.  Wool that surfaces, more often than not, are individual hairs from any given knot.  As each hair is released from a knot, the knot will subsequently become more loosely packed in the structure of the rug, making it far more susceptible to future shedding.

Posted by Morrone Studio Indesign at 3:35 PM No comments: 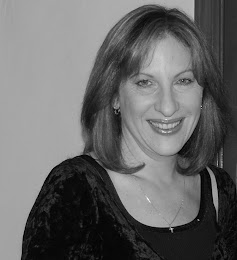